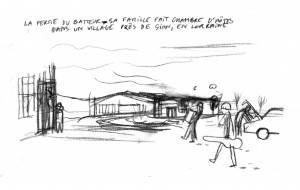 The musicians (friends of my sister, who plays violin on the album) had just left music school, most of them didn’t really know what pop was, it was their first recording experience.

The sound engineer was the boyfriend of my girlfriend’s best friend, but we didn’t know each other. He was more into the industrial music scene, which was good because it meant he didn’t have any preconceived ideas about what pop was supposed to be, and just got on with it.

I asked Jérome Didelot, who was more of a guitarist, and wrote and sang in his own group, to play bass, in order to get something melodic.

Jacques Tellitocci was a percussionist, which lent a slightly random quality to his drumming, as he’d got out of the habit of playing. I didn’t mind this at all, as I wanted to avoid it sounding automated.We put sheets over the drums, I made some sort of whips to get a slightly deadened effect.

Drum sounds at the time had become banal and flavourless, as had bass: Francois Galland and I spent hours fiddling with the pre-amps trying to get what I wanted. In the end the effect was more successful on the bass than on the drums, but the intention was there.

We were staying at Jacques’ house, he and his girlfriend did bed and breakfast for us in their un-renovated farm. I’d chosen the place because there was a piano and we could use the acoustics of several rooms. But it was winter and we were dying of cold.

I had conjunctivitis throughout almost the whole recording and couldn’t see a thing. No-one took my photo: I had red eyes and looked awful.

When the recording was finished, our hosts were so happy that we were leaving – the atmosphere had been a bi 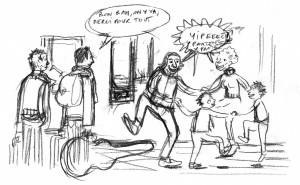 t tense – that they danced in circles with their kids in the kitchen, right in front of us.

The team from Ici d’ailleurs dropped in a couple of times to hear where we were with the project. The second time, they realised that we would never finish the vocals. They left saying that we’d wasted too much time on the arrangements, that there were too many.

Alexandre Longo saved the day by suggesting that I could do the vocals at his. He graciously lent me his studio, his microphone, it was great. And to thank him I fried his brand new Mac G4, by pushing the 110V button by accident.