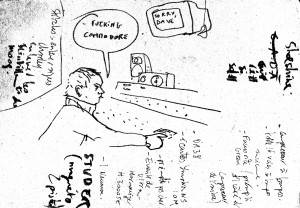 Once the recording was finished I didn’t know who was going to mix it. I couldn’t do it myself as you needed special kit to read the master tapes.
An A&R at Creation who seemed interested in the demo tapes recommended Tony Lash8 to us. Ici d’Ailleurs didn’t even contact him.

The problem was that there was no money to finish the record.

And still no contract from Virgin/Labels who started suggesting after having listened to it a few times that I re-record the whole album in French.

Ici d’Ailleurs proposed that François, who had done the recording with me, mix the album. I’d have preferred someone with a bit more distance.

He started by doing three mixes. It wasn’t working: I got Stephane to listen to them and he threw the minidisc in my face.

Then I came to blows with an assistant at Ici d’Ailleurs, who resented me because he was the one who filled out the cheques, and saw huge sums leave the company while he was on the minimum wage. He was constantly on my case, and it completely ruined my relationship with the label, which had started out well.

Then it dragged on for a year. Out of work, I had to take a crappy job for eight months, each track of the album going round and round in my head, driving me mad!

Eventually I charged into their offices demanding that things get a move on. I screamed at them, and it worked: they finally decided to mix in Leuven with John Cunningham9 who I had discovered in the mean time, in the huge studio where Yann Tiersen recorded his work.

They left us alone with equipment we weren’t familiar with at all.

John could only stay 10 days. Stephane Kraemer, who owned the studio, took over on several tracks. With John, it was the first time that I’d worked in such complicity with someone, and it was the only enjoyable experience I had on the whole project.

Afterwards, I was left with the impression that the instruments were in the middle range of the mix and that we hadn’t really succeeded in capturing the details of the recording, or the groove (even though that wasn’t the point, I didn’t realise it at the time).