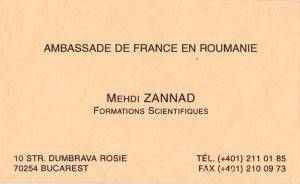 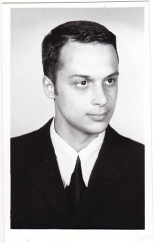 The album was written in Romania during my military service in Bucharest. In Europe then, but far from England and France.

I wanted to create something continental, but Central European, with different sources playing on my imagination: Brancusi, Tzara, Cioran, Bauhaus-inspired architecture…

You can always tell an interesting story with that which surrounds you.

I wanted to look for inspiration directly in classical music rather than in pop arrangements, to avoid anything too self-referential or inbred. I had studied at music school and saw an under-exploited richness in classical music.

At the time, Britpop seemed to me to be a degenerate descendant of the 60s. At the same time I wanted my music to have a sentimental, personal side, a bit like the Beach Boys.

I started writing on an upright art deco piano (all flowing lines and florals) rented from the Bucharest Opera. I was living in a tiny flat – its decrepit state down to an earthquake that had ravaged the city in 1942 – and was working in the cultural service department of the French Embassy. In a backstreet, I stumbled upon an old photographer who took the portrait that I used for my Romanian passport.

I originally wanted to record with classical musicians at the Bucharest radio studios. I visited their headquarters, where there was an enormous studio for orchestras to record, but the prices they quoted were crazy.

Before this period in Romania, I had lived in London for a year, where I was a neighbour of Sean O’Hagan.

It was ‘95–’96. I met Laetitia Sadier and Sean within weeks of arriving. They’d managed to integrate the influence of the Beach Boys in their music without any embarrassment, or seeming backward-looking. It felt like they were the only people who understood what I was trying to do. Looking back, you could say I moved to London solely to manufacture this encounter.

I gave them a tape after a High Llamas gig which Laetitia was at. Sean later lost it, but Laetitia insisted he listen to it. So she called me and arranged to meet in a pub in Forest Hill, with Martin Pike, the manager of Stereolab and of Sean.

Sean told me he wanted to produce a mini LP on his own Alpaca Park label, and Laetitia suggested that we share a split single for Junior, Jean-Philippe Talaga’s fanzine (he went on to launch M83).

I was over the moon…

Sadly, Sean had difficulties with Sony or V2, and had to back out of investing in the idea, even though it was around the time of their Hawaii album, which had done pretty well.

He was producing the new Beach Boys album, and told me about meeting them, which was pretty fascinating. As I understood it, Brian Wilson had opened his front door to him sucking his thumb, with a comfort blanket.

Yann Tiersen encouraged d’Ici Ailleurs to sign me, I think he even announced in an interview for Magic that he was going to produce the album.

Stéphane Grégoire, the label’s founder, distributed my first EP5 when he worked at Semantic, and the record had sold well, especially in Japan and the US. He just had a feeling it could work.

The fact that my English friends were known to be championing it created a bit of a buzz in France. He’d heard that Virgin/Labels were keen and wanted to be the middle man to offer them a licence.

He introduced me to Moondog, Carla Bley and Charlie Haden’s music while I was writing the album, which made a big impression on me.

The seasoned French producers I met didn’t understand why I was so openly interested in the Beatles, the Beach Boys or in the 60s and 70s in general, though Stereolab were already blazing that trail, which made me think I should follow my intuition and go ahead. That meant taking on melody, harmonies, vocals, arrangement and production. Above all I didn’t want to end up with the usual middle of the road drums and the kind of sound that dominated French indie music at the time.